Becoming a manager or taking on any new role, we do the best we can with what we have. Even though we believe we can do the job, there are going to be challenges. Being responsible for a group of people can be daunting at times.

There are going to be personality clashes, some of your team members may have been in the job longer than you, they may have applied for your job and didn’t get it. There are all manner of nuances and subtleties that we often aren’t aware of until we do something that feels like stepping on a landmine.

Here are the top three things we tend to do without realising that piss off our team more than we know.

1) Being directive when delegating.

In this modern age, the power dynamic is changing. Asking people to do things in a way that negates their agency and talent is at best irksome and at worst demeaning.

I remember hearing a manager say “I’ll get you to …” as a way of letting me know what they wanted me to do. It was grating and at first, I couldn’t figure out why, the words were benign enough. But what was happening beneath the surface was a complete bypassing of the request, there was no ‘ask’. And there was no recognition that I could see what was needed, or support to get me there.

It’s okay to give direction but be sure that you’re doing it with the utmost respect for the abilities and skills of the person you are dealing with. The best time to give direction is when it’s being asked for.

When we ask people to do things as part of their job we expect them to do it. And that’s reasonable.

However, they don’t always do it. This can be frustrating, even infuriating. People have free will, and they are not slaves or robots. Yes, it’s reasonable to expect that our team will do what we, as managers, ask but when they don’t, how do you react?

This is where you can find the depth of your expectations. Do you expect them to be compliant? The very word implies docile, thoughtless, robotic, acquiescent obedience. If you have a team of people who are like this, you’re in trouble.

We want people to think independently, and we want people to be able to come up with ideas for new ways to do things, innovation, and improvements. Sometimes we just want them to do what they’re told and in regulated environments, it’s more appropriate to expect that people will follow directions.

However, when people don’t do what they’ve been asked it’s important to get curious about that. Your frustration may get in the way of your curiosity, and when you ask yourself why, or rather ‘why not?’ you may not care about the answer, but getting curious can help you understand what’s going on.

There are all sorts of reasons why a team member may not be following the instructions or say they will do a task and then not do it. Some may be work related, some won’t, but these are whole people that have lives that are at some point going to affect their work, for better or worse.

So when someone doesn’t do what you ask, get curious! 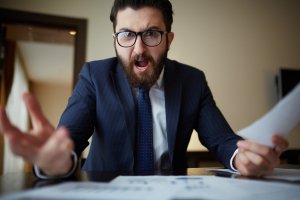 You’ve got pressure from your boss to deliver, and you’ve got this person who is learning, but slowly. Your nerves are frayed, and your patience has worn thin. You find yourself in an outburst of frustration and anger that may have been inspired by them but really isn’t about them.

You see the look on their face and realize you’ve just damaged their image of you, they’re now afraid of you and don’t trust that you have their back when times are tough. Damn! All that in one blow-up!

Frustration is normal and natural, yet the way we express it is usually unskillful and has impacts we rarely realise. Even when we try to avoid expressing our frustration, it often leaks out non-verbally. This is where emotional intelligence comes in. Being able to manage your own emotions and detect the emotions of others is one way to deal with tricky interactions with our teams.

Mindful expression of frustration is better than pretending it’s not there.

Be real about what’s going on for you, it doesn’t mean you have to tell them everything.
Remember that learning, making mistakes, screwing up, this is probably pretty frustrating for them too, and there’s often a feeling of shame attached to things not going as intended, being late, or needing correction. The best thing that can come of these kinds of situations is strength from having overcome a challenge. This is foundational in building effective relationships with employees, if they don’t trust you or feel you don’t trust them, you will never get their best work from them.

How we manage the people in our teams can make the difference between performance management and high performance. You as the manager can make or break your team. Get curious, learn about your own responses, and learn about them, what works for them and what doesn’t. You’ll be surprised at how far a little effort and care can go.
Plenty of managers act like they’ve got it all handled, but aren’t seen that way by those they manage. Be the one that has the impetus to learn to manage people from a human-centred perspective and watch your team succeed beyond your expectations.
By Tathra| 2016-04-26T10:58:46+10:00 April 11th, 2016|Uncategorized|0 Comments

About the Author: Tathra