Why ReWrite the World Blog Challenge?

Why ReWrite the World Blog Challenge?

I imagine a world in which our minds are consumed the possibilities of a bright future, not because we turn our backs on the storms and darkness, but because we embrace it all and allow the contrast to inform our experience and because we have dealt with the shadow, the things we’ve been reluctant to talk about. I imagine a world in which we have the hard conversations as a society, that get us closer to a sense of planetary wellbeing. 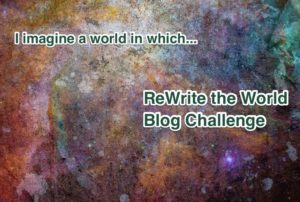 If you’re as hungry for a vision of a better future, as I am, I invite you to join me on this blog challenge, reWrite the World. See below for the details and template, or do it however you see fit.

There is so much bad news, it’s easy to get discouraged, it can overshadow all the good things happening outside the spotlight. I’d lost sight of my own vision and got inspired to write about the world I want to create. Using Marianne Williamson’s prayer starter “I imagine a world in which…” as a place to start. I found myself doing what I see most of my clients doing which was focusing on what we don’t want. Focusing on what’s happening now rather than how we’d like it to be.

One of the things that’s stopped me from sharing my vision is concern about negative reactions. I’m going to be saying some pretty lofty stuff that is likely to provoke the part of us that doubts that change is possible, it will trigger the pessimist. And it can take a bit of thought to move beyond that and get inspired, if we’ve become cynical.

The invitation is to invite your imagination to activate a sense of hope. And if you think you can do better, DO THAT. ReWrite your own future and join the blog challenge. The more voices reWriting the World the better!

As a young activist, I heard the bad news about having a decade to turn things around before all hell broke loose, ecological and economic collapse was a pending and probable future. That was over two decades ago, and sure things aren’t awesome, in fact in from some perspectives, things are pretty bad, ecologically, socially, economically, however, it’s a lot less catastrophic than I anticipated.

We’re still here, it’s not great for everyone, and I am blessed with a lot of privilege, largely due to where I live (among a few other factors). In fighting for change, I had a sense of urgency, that began to wane a few years ago, once I did some personal work on myself and also realised we have outlived our prognosis.

About 10 years ago, I remember doing an activity with some of my environmental education colleagues at CERES about the possible, probable and preferable futures. Many couldn’t imagine a preferable future. It struck me that it can be a scary thing to have hope for the future when one’s perspective is focused on how bad things are and how much humans are screwing up the earth.

More recently, I noticed myself feeling less than hopeful about world events, local elections, and the plight of refugees, despite a fantastic article about how good things are in a relative sense. Inspiration was lacking, big time, and instead of trying to find it outside myself I decided to create my own. And invite others to do the same.

Sharing our vision for a brighter future can feel risky, it can attract criticism about grand ideals, but that’s the point! It’s about challenging the status quo, dreaming big and evoking our inner visionary. This blog challenge is dedicated to making space for the long-range vision of how the world could be.

In her book, Thirsty Paper, Juicy Pens, SARK talks about writing her future, when she wasn’t enjoying her present. She made up how she would prefer it to be, initially as an escape but then found the value in it. I love this concept as a way to shift the focus toward what you want, not just what isn’t working so well.

Here’s to writing the future, one we desire, one we can be proud to work toward.

From August 20 to September 10 you will see a post each day with a vision statement and a corresponding blog post. If you feel inspired to join, please do. See below for details.

I imagine a world in which [Vision statement] so that…[examples of vision realised/outcome].
[Current state example.]
If, [vision statement], then [desired state].
Can you imagine?

About the Author: Tathra